This website uses its own and third-party cookies to store and retrieve information when you browse. Cookies are used to distinguish users, to save the selected language and to recognise users, etc. You can authorise or disable their use, as well as change their settings whenever you wish. If you continue browsing, you are deemed to have accepted the use of cookies. For more information, please click on “Adjust your settings”.
Accept Cookies Adjust your settings

A story of tenacity and resourcefulness of a mother who was determined to succeed.

A mother’s plight to rescue her 23 year old son, John de Villiers, who was stranded in Asia and his mother’s wish to return him safely home to South Africa, led to a fantastic story that has to be told.

The amazing story involved using key contacts available via SKÅL INTERNATIONAL’s global reach, embassies across 3 continents, an ambulance-get-away vehicle and a one-way journey of 27 hours in the air, over 3 days flying 22,000 km, quite literally half way around the world.

Nicolette de Villiers recounting her extraordinary story told me, “In January 2020 my husband and I enrolled our son John at the Explore Asia Academy in Hua Hin, Thailand to complete a TESOL course with the idea that he could teach English whilst completing his on-line BCOM Degree. It was with much excitement and anticipation that we, as a family, went to Hua Hin to visit the Academy and make sure that their operations looked legitimate,” she said.

Once back in South Africa with her daughter (her husband had to return to China where he works), she was informed that her son would be placed in Myanmar to teach English. John full of enthusiasm flew to Yangon in Myanmar from Thailand.

The school was privately owned and operated by Ms Chan a Chinese/Burmese lady who acted as the School Principal. She recruited approximately 100 pupils for John and the other foreigners to teach. John was sent to a school in Mawlamyine which was a six hour bus journey from Yangon.

With Covid-19 becoming more prevalent the family continuously enquired from John on the status of the virus in Myanmar. Initially the school remained operating but there were less pupils. Some overseas teachers had already left and later the school was shut down altogether. Two teachers plus John remained.

With South Africa announcing on the 23rd of March 2020 that it was going into first stage lockdown, Nicolette requested the South Africa embassy in Bangkok for assistance with the repatriation of her son.

In Myanmar there was local mistrust and fear that foreigners spread the coronavirus, the teachers were becoming increasingly isolated and shunned by all locals. In the end, the school principal moved them to Thanbyuzayat, 64 km south, where there was no Covid-19.

Nicolette told me, “One evening I met up with a family friend Helmut Amos and explained to him my situation that I didn’t know what to do but that I had decided to try to get John out of Myanmar where he was stuck so far away from Yangon with no transport options,” she recounted.

“The need to get John out of Myanmar was becoming increasingly urgent. I was uncomfortable and I noticed that John started sounding less optimistic during our WhatsApp calls. Initially he was positive that the school would re-open and that they would return to teaching. Often when I called him the township where he was staying was having a power failure for hours on end,” Nicolette recalls.

After days, weeks and months of phone calls and email exchanges it was looking impossible to get John home until a chance conversation, showed a possible way forward. It was good fortune that during the conversation with her friend Helmut, he suggested making contact with mutual friend Reni Hildenbrand, owner of Hildenbrand Wine & Olive Estate in South Africa. Reni knew Bangkok Skål member Allan Riddell. With Allan’s global travel and tourism association contacts and his links with the South African Thai Chamber of Commerce. Along with Mr Graham Macdonald, Honorary Advisor to the SATCC chamber, they all played an important part to coordinate all the arrangements in the complex plan.

In Myanmar the country was becoming increasingly locked down due to Covid-19, internal movements from one province to the next, were difficult, with ever increasing reams of paperwork required by the authorities. Getting John to Yangon without delay was imperative. With no direct flights to South Africa and all borders to neighbouring countries closed, the only way out was via the international airport in Myanmar’s capital.

With the help of all concerned and in particularly John’s mum Nicolette, arrangements were finally made after much work, to fly John out.

Flying first with Korean Air, Yangon to Incheon then on to Amsterdam.

In South Africa Nicolette contacted TTS KLM Repatriation. The agency was helpful and informed her she could book with two separate tickets and that the time period for connecting flights may not extend longer than 48 hours. She checked and there was a KLM repatriation fight to Cape Town that would connect with the Korean Air flights coming from Yangon- Incheon – Amsterdam. “There was hope and I had faith,” she said.

At the same time Nicolette instructed John to find out how and what mode of transport he could get from Thanbyuzayat to Yangon. He was told that buses operated for locals only but was also informed that with new legislation that there were no taxis or buses (even for locals) permitted to drive to Yangon due to the lockdown.

John was also told that a town between Thanbyuzayat and Yangon had gone into lockdown and that he would need to go into quarantine for five days to get through there to Yangon.

On Saturday the 19th September John went to a Health Centre for a covid test. It cost USD $200. On Sunday 20th September the results and certificate were released and John was negative. A vital part of the paperwork trail had been completed. Now things moved fast.

They would first take a taxi before changing vehicles to an ambulance. The purpose of the ambulance was to increase the chances to get him through the quarantine roadblocks and to get to his flight on time!

It was subterfuge but it worked!

The confident former military driver bluffed his way in the ambulance and was not stopped and was allowed safe passage with his ‘sick’ patient without delay.

John would then fly from Seoul/ Incheon 14:05 to Amsterdam arriving 18:55 and later depart Amsterdam on 22 September at 21:50 arriving home in South Africa landing at Cape Town 23 September 9:20. 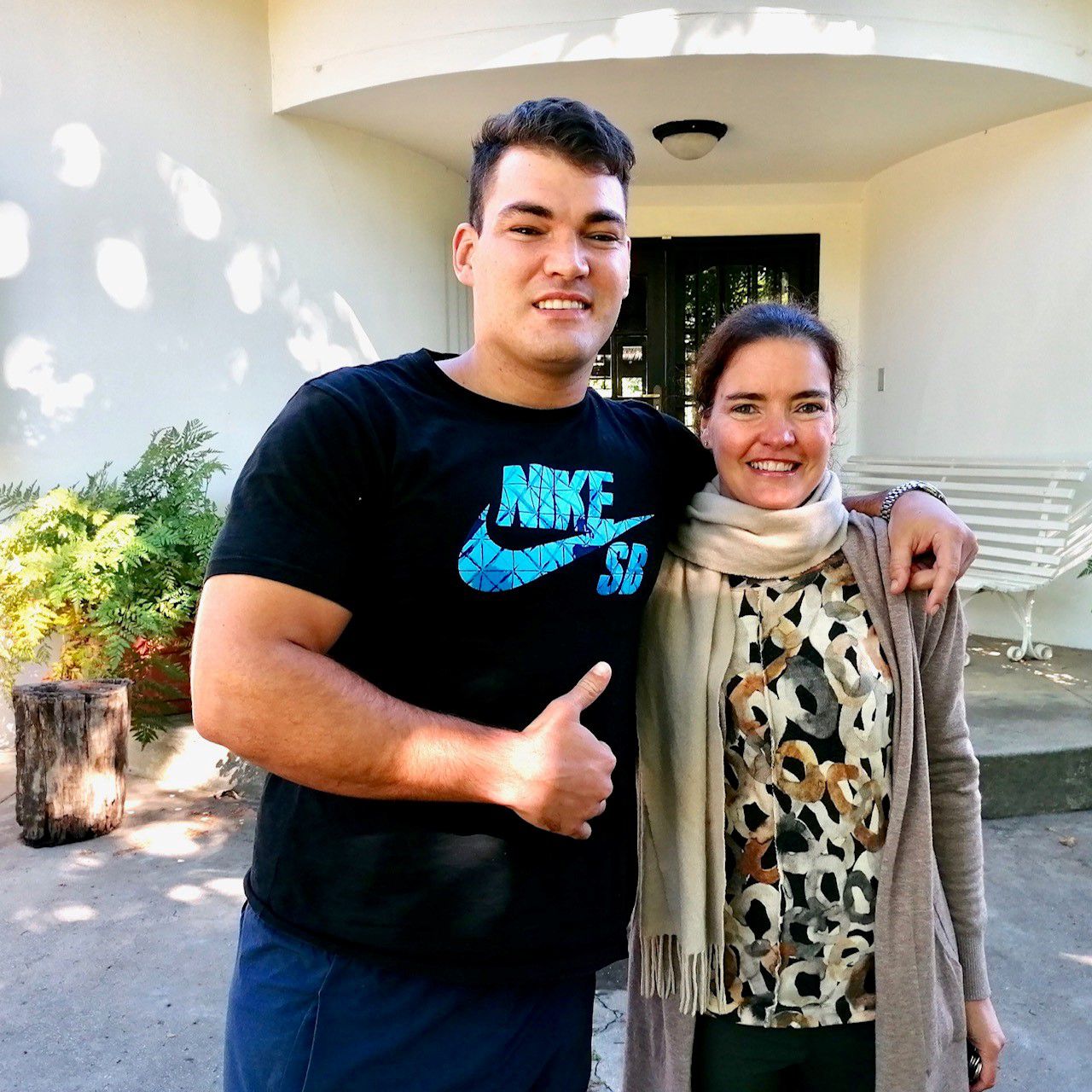 John and Nicolette de Villiers - mother and son reunited at their home in Paarle South Africa.